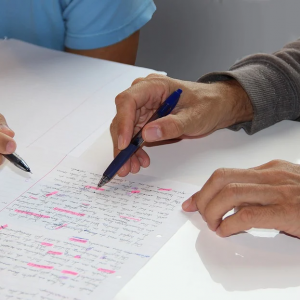 Posted at 08:46h in Executive Functioning by Craig Selinger 0 Comments

I just wanted to send a little synopsis of what Holden and I worked on in our sessions throughout our time together so far.

I have maintained a little contact with Holden to see how he has been doing. He appears to be in good form apart from the washout in Rhode Island.

We worked on a number of things to assist with Holden’s executive functioning, from fundamental skills to more advanced skills such as:

Keeping his workspace neat and organized, in addition to his backpack for the occasions where Holden was in person.

Overcoming the distraction of his phone: Holden had scheduled ‘Do not disturb’ on his phone, which definitely reduced the phone distraction.

Holden created a google document with all of his zoom rooms, including his office hour meeting places. Prior to this, Holden had been scrambling last minute to get to his classes, calling friends, etc.

Holden and I discussed his tendency toward task avoidance. We worked together on overcoming procrastination in many ways, like creating visual schedules that he follows for his work and study. Obviously, with a schedule like his that changed and was complicated with external events, primarily baseball, this seemed difficult for him to stick to. It’s something I would like to continue with, perhaps with the scaffold of parental signatures beside each slot when completed ok a daily basis, reduced over time. In addition, more emphasis on Google calendar to assist in his planning and prioritization.

Piggybacking on that last point, Holden also had difficulty with work prioritization, which we worked on. Holden prioritized based on level of difficulty and due date, emphasizing working on the most difficult tasks first. Holden’s ability to do so was definitely cultivated during our time together which was evident when he would prioritize his work with me while sharing his Google classroom screen.

Holden and I worked on taking structured breaks during work. It was something that Holden needs to continue to work on consistently, using timers to assist. Holden and I decided on short breaks for this purpose, five to ten minutes, as anything longer than this made it very difficult for Holden in terms of regaining focus and getting back to work.

Virtually – Holden had a large amount of emails and clutter; he conducted regular checks with this and maintained a pretty clear inbox for the majority of our time together.

To assist Holden with keeping on top of the reading that was expected of him at home, I had him work on a reading log. I wasn’t entirely satisfied with the quality of these, so I had Holden type these, send them to me daily. It was sometimes problematic, so we set up a text chain to ensure Holden was holding himself accountable for these and that if he needed a break, he put it in this chain. I want to continue with this as it was not as consistent as I would have liked to a point where I could remove that scaffold.

Holden increased his ability to formally self-advocate in emails such as scheduling and attending office hours.

Holden and I worked on breaking larger tasks into smaller tasks by chunking. It is something that, again, I would like to continue to work with and monitor.

Holden worked on goal setting. We used SMART goals (an acronym for goals being Specific, Measurable, Achievable, Relevant, and Timebound, for French and Math and monitored these in our weekly sessions.

P.S. Holden is a fictitious name.

With a Postgraduate Diploma in Learning Support and Special Educational Needs and a Postgraduate Diploma in Education from Trinity College, Dublin, Ireland, Stephen worked for eight years as a special educator for a middle/high school in Dublin, Ireland. He taught one-on-one and with groups music to students aged twelve to eighteen years of age. Stephen then relocated to New York City and has spent the last four years working with elementary-age students (K through 5) teaching ELA, reading, writing, math, science, social studies, and executive functioning skills in a therapeutic setting. He also has co-lead individual sessions, social skills, and playgroups with clinicians and psychologists. During this time, he also acted as a home tutor to students who were unable to attend school for differing reasons such as anxiety, and serious health impairments. He currently tutors to all learners. Stephen believes that through academic attainment, whatever that may look like, students will enhance social-emotional goals such as increased self-esteem, among others. Stephen’s secret ingredient is his passion for music. Stephen strives to promote student independence by creating an empowering strength-based, academic learning environment. For him, there is nothing more satisfying than helping students grow in confidence, whether it be academic, social/emotional, or otherwise to reach their full potential.

Call or Chat with us TODAY!